Tornado ran (for 22 issues) concurrently with 2000 AD progs 105-126 before being merged with the longer-running title. 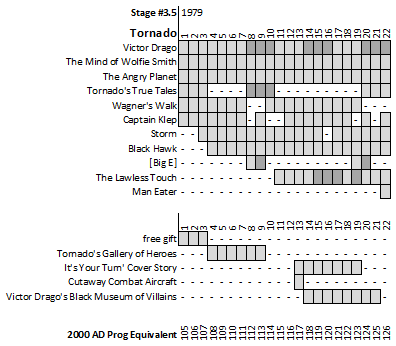 Victor Drago
Presented as a mixture of text and strip stories (4 of the 6 are text), these are the investigations of Baker Street residing, pipe-smoking detective Sherlock Holmes Sexton Blake Victor Drago and his assistant Watson Tinker Spencer.

The Mind of Wolfie Smith
Nondescript young man has ESP.
Continues with the 2000 AD merger of prog 127.

Captain Klep
Klutzy superman knock-off causes comedic chaos, one page at a time.
Continues with the 2000 AD merger of prog 127.

Black Hawk
It's Spartacus meets the Dirty Dozen as a nubian warrior leads a special Roman cohort accompanied by his familiar (and literal) black hawk [see title].
Continues with the 2000 AD merger of prog 127 and becomes something else altogether...

[Big E]
The first two are "Big E Specials" and the final two are photo stories in which Dave Gibbons gamely abandons any pretense at ego by dressing up as the superheroic titular editor.

The Lawless Touch
Johnny DiGriz Lawless is a thief turned secret agent who sometimes goes up against the Russians Volgans, making this a mash-up of the premise of The Stainless Steel Rat and the setting of Invasion. (Set pre-Invasion, we can note the absence of any global flooding.)

Tornado's Gallery of Heroes
A poster series by Carlos Ezquerra that provides everything from Roman Centurions to Mek Warriors: really a warriors through the ages (and beyond).