It's worth noting that the Meg of this era was fortnightly, so is moving at quite a clip. And a point that's worth repeating: there have definitely been times when the Meg felt like the prog's poor cousin, but here the shoe's on the other foot in terms of some stories that are showing off that perfect combo of quality art and script.

The problem is one of consistency, with Harlequin's Dance arguably the weak sauce in a Dredd & Shimura sandwich. The momentum loses traction as we move through the stage, spinning out on the shoe-horned Harke & Burr and the morally repugnant Creep before picking up again with the double threat of Pan-Africa and Calhab (leading us out for the big 2.50 jump-on). 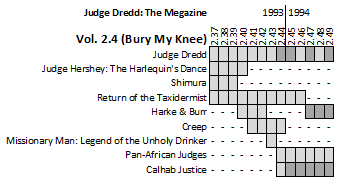 Judge Dredd
Mechanismo's such a kick-ass high concept, that you just have to waft the suggestion of a sequel under my nose to throw my thrill-circuits into overdrive. The second sequel, Body Count, stomps along here for seven issues: an unhinged Stitch roaming the sewers looking for the rogue Number 5, for all the world like a Mega-City Dr. Frankenstein.

Bury My Knee At Wounded Heart (meg 2.46) is a one-off that's often cited as a contender for Best Dredd of All-Time. It's got pathos.

You ARE The Mean Machine (meg 2.47) is a comedy fiesta that riffs on the notion of Choose Your Own Adventure and ends with a limerick competition to win the orginal artwork from the story. (Hopefully the original art doesn't also contain the competition text, because otherwise we could end the universe in an infinite art competition loop.)

Next stage sees the controversial Howler, and the build-up to Wilderlands...

Judge Hershey: The Harlequin's Dance
The Pied Piper of Hamelin (dressed as a Harlequin - see title) steals a bunch of kids and takes them to a mirror dimension. (Pretty sure this sort of mass theft of children happens to Anderson as well in a later story.)
Hershey needs some time to recover from all of this Fairytale in M-C schtick and doesn't return until volume 3...

Shimura *NEW THRILL*
A stunning opening three-parter from Frank Quitely and Robbie Morrison focusses on the hi-tech crimes of Hondo City and introduces Judge-Inspector Shimura and Cadet Inaba. Everything about the design here is lavishly detailed: from the stylized lettering to the action-blended 3D sound effects (that seem ahead of their time even today).
As with Quitely's launch of Missionary Man, there's a sense of loss when other artists carry on the franchise - like when you buy a comic with great cover art only to be disappointed that it doesn't continue on the inside. Frank Quitely is quite frankly a hard act to follow. Shimura returns in the next stage...

Return of the Taxidermist
Spinning off from 1987's The Taxidermist (in Dredd), this sees Jacob Sardini, skilled human taxidermist, compete in the Mega-Olympics. Wagner and Gibson are masters at shaggy dog comedies and you get to enjoy scenes such as the semi-nude recreation of the birth of Hitler (competing with The Producers for most ridiculous recreation of Nazi iconography) and the new olympic sports of staring and sex. Plus there's the moment when an axe-wielding maniac takes out the synchronized swimmers and gets top marks.
Returns in 1998, in the prog, with Revenge Of The Taxidermist...

Harke & Burr: Antique & Curious
Si Spencer and Dean Ormston have fun with A Hamster Horror Production, which features giant undead hamsters, and Grief Encounter which riffs on both Frankenstein and Metropolis.
There's another of these next in 2.83...

Creep *NEW THRILL*
I'm not going to be able to be fairly neutral because this is a story that I always detested. I'm assuming it's Marmite and has its fans. Plot: there's a super-mutant who lives in the sewers and murders and tortures people. He's creepy. He's the Creep. It's creepy. I'm creeped out. Imagine if, during The Texas Chainsaw Massacre, Leatherface was the protagonist. And we just watched him fuck with people for the entire movie with no repercussions. That's kind of what this is.
More next stage. For Grud's sake, when will the horror end?

Missionary Man: Legend of the Unholy Drinker
An odd little one-off where a zombie from Judgement Day has a drink with Preacher Cain and his sidekick.
A proper long-form series starts up in the next stage...

Pan-African Judges *NEW THRILL*
There was an explosion of the idea of world Judges and so something of a creative competition to come up with culturally appropriate Judge uniforms for every nation on Earth. Here, Brit-Cit Judge Becky Steel (sister of Treasure Steel from Armitage) teams up with Judge Assengai of Pan-Africa. There's lavish design, with an intricate map of the continent that lays out much more detail than we've seen (before or since), and great art from Siku. The plot revolves around ivory poachers, but underlying it is the idea of continuing colonialist violence and exploitation.
We have to wait until Volume 3 for a follow-up...

Calhab Justice
Casualty is a dark tragedy where an empath is tasked with saving an injured victim, and serves as a prologue to the longer follow-up of Unfinished Business, where a rogue Judge goes on a psychic rampage.
More bitter gloom in 2.63...

Supporting Content
Worth a mention here is a (post-Judgement Day) "Offical World Map" in meg 2.37. That launch issue also came with an Anderson poster comic that I've managed to lose, and then the next issue came with a Dredd / Mean Machine poster calendar.