Whilst Judge Dredd has dominated 2000 AD since prog 2, consistently being there (having skipped only 2 progs up to 1991) and having its own Annual from 1980 onwards, it wasn't until 1988 that the Sci-Fi Special got a new sibling in the form of the Judge Dredd Mega-Special. That first special, playing off the idea of world Judges that had shown up in the prog, presented Dredd's World and suggested that there was an entire globes's worth of content waiting to be written about: 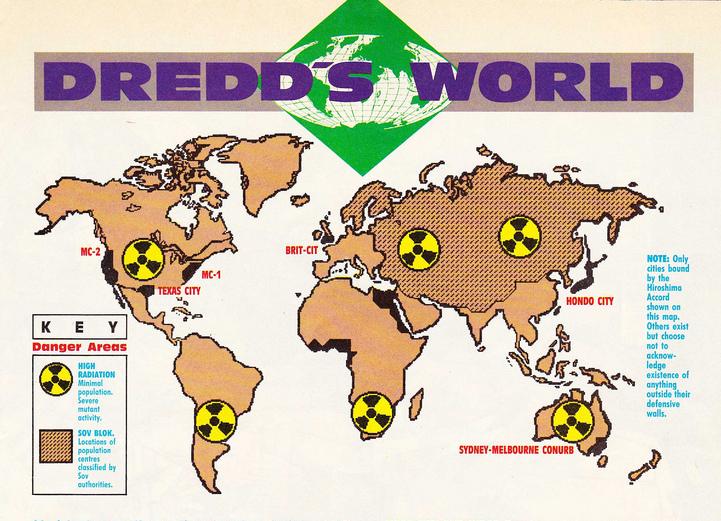 Some time in development, the first Judge Dredd Megazine was released in October 1990, and ran monthly for twenty issues before converting to a fortnightly format as a second volume. It's difficult to measure 2000 AD without including the content of the Megazine as it launched characters and throughlines that at times overshadowed the content in the weekly that spawned it. America, for example, has characters that echo out over the Dredd saga all the way to the present, and in that sense, we can't really untangle the two comics. 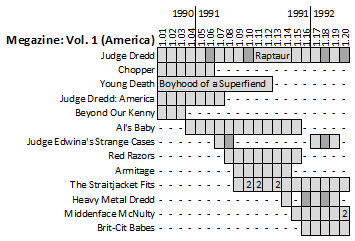 Judge Dredd
Of course Judge Dredd is the title strip in his own Megazine, but it's overshadowed by the superlative America [see below] in the first seven issues. Probably the most memorable tales here are Midnite's Children (a bleak comedy about a murderous dynasty of doomed psychopaths) and Black Widow (well ahead of 1995's Species): a Hicklentonian rendition of horror and a sequel to the classic 1985 morphing alien parasite tale from the prog - Nosferatu.

Raptaur pits Dredd against a bullet-proof, blast-proof, razor-toothed, poisonous, betentacled, hypnotic, stealth-capable alien that is feeding copiously on the cits. This series is notable for Dredd's gritty method of stopping himself falling to his death: he impales his own hand using his trusty boot knife. Also of note is the first appearance of Psi-Judge Karyn, who gets her own series in 1994. A friendly-ish raptaur later becomes a pet of sorts in 2004's The Simping Detective.

In Volume 2, Dredd crosses over with the prog's latest mega-epic...

Chopper: Earth, Wind & Fire *RETCON*
Given that Chopper met a tragic (and seemingly permanent) bullet-ridden fate at the finishing line of Supersurf Eleven (in Song of the Surfer), it was a surprise for readers to see him pop back up and brush himself off a few months later seemingly none the worse for wear.

Where it's precursor (with all the fireworks and blood) was an examination of how media-driven spectacle could lead to gladitorial inhumanity (whilst also perhaps being a study of the futility of a macho mindset), this particular boogie wonderland mashes up the moral of Crocodile Dundee (don't fuck with a bushman on his home turf - or - biggest knife wins) with rote stereotypes of ocker Aussies - like a Chief Judge who's always drunk and wears a cork-adorned cattleman's hat.

A bit like when the A-Team defeated a gang of heavily armed thugs with a cabbage-firing tractor, here we must swallow defeat of one's gun-toting enemies by harsh language, posturing and well-timed beheading with a surf board whilst traveling at speed through the cab of a truck. Strewth, mate!

Young Death: The Boyhood Of A Superfiend
In an epitome of dark comedy, Judge Death (lodger of the mostly blind and befuddled Mrs Gunderson) dictates his life story to investigative journalist Brian Skuter. Young Death (a boy named Sidney) has a penchant for offing those he finds troublesome, which is not unlike that depicted in The Wasp Factory (Banks, 1984). Whereas the novel allows a restorative conclusion of sorts, Death's never quite satisfied: there's always another sinner to judge (as well as solving the thorny problem of his own mortality).

It seems somewhat rushed at the end, and the other three Dark Judges are thinly drawn dudes who seem oddly keen on becoming really fucked-up superfiends. We can pretty much buy into Death's whole shtick, but it would be interesting to see why Fire (for example) opted for (or was doomed to become) a flaming skeleton, as opposed to just a similar entity to Death.

Death returns in Volume 2 for a nice cuppa...

Judge Dredd: America
A seminal tale of the struggle between democracy and authoritarianism in Mega-City One, and also a love story, and also a favorite of John Wagner with superlative art by Colin MacNeil. In some ways it's the perfect encapsulation of Dredd's world: something you could give to anyone who hadn't read Dredd so that they could get it. On the other hand, the focus on the plight of the citizenry clearly places Dredd in the role of antagonist, which isn't always true in the general arc of the character.

America Jara is the daughter of Porta Rican immigrants, and grows up friends with Bennett Beeny. As she joins a pro-democracy movement and becomes involved with their militant wing (Total War), Beeny becomes a famous singer and their lives drift apart: until a crisis reunites them in tragedy.

Beyond Our Kenny
A sequel to 1986's The Art of Kenny Who?, which was a combination of the classic Who's On First? sketch and Cam Kennedy's real encounter with some U.S. suits with a poor cabability for appelational comprehension. During the first adventure, Who? was cubed (for fighting back against corporate art thieves), and now his wife and kids have come to the Big Meg to track him down. Get ready for plenty of this sort of thing: "Name?" | "Who?" | "You!"
I may be skipping one, but there's a sequel that starts in 2005's issue 228...

Al's Baby
Well in advance of Arnie-vehicle Junior from 1994, this comedy tells the tale of mobster Al Bestardi, brow-beaten into carrying his wife's baby to term. That she's also the daughter of the mob boss explains his motivation. Cue morning sickness vomit all over the Godfather, Al's Ratso Rizzo-like mobster buddy Sal making him quit his beloved cigars and escalating levels of gang violence as Al works through his pregnancy.
More from Al in 1992's issue 2.16...

Judge Edwina's Strange Cases
A one-off format, later replaced by Tales From the Black Museum (in 2006), the Strange Cases were relatively short-lived, with only nine in total spread out over three years, and cropping up in Mega-Specials and Yearbooks.
There are a couple more of these in upcoming Mega-Specials, then that's it.

Red Razors
The author stars in an alternate reality where Dredd's world is a pile of day-glo poo. Sorry, sorry: the politeness and balance bafflers got switched off for a moment there. Try again: in the future of Dredd's world, East-Meg Two is culturally like an episode of Happy Days. Judge Razors (a reconditioned ex-con, and a self-confessed complete dick) and his colleague, Judge Ed (a talking horse with a Judge badge stapled to his chest), ride into battle against perps - gunning them down with abandon. It's all just so hateful: I'll let Kryton describe Red Razors for us, but there's not much anyone need add to the character's own description of himself: "I prefer to be nasty".
Ye gods: more Razors in the next Mega-Special...

Armitage
A Brit-Cit detective Judge in the mould of Jack Reagan (The Sweeney) and Inspector Morse, Armitage is teamed up with rookie Treasure Steel in an Agatha Christie-like murder mystery as various high-level Judges within the New Old Bailey meet grisly ends in quick succession.
A sequel begins in 1992's issue 2.10...

The Straitjacket Fits
A surreal comedy of varying episodic page-length (sometimes a one-pager, but ranging around like ... a lunatic) follows the adventures of Doctor Drongo Stabbins, newly arrived at one of those fictional insane asylums populated by likeable crazies (including Randle McMurphy from One Flew Over the Cuckoo's Nest). Will the lunatics take over the asylum?
The Final Fit arrives in the 1993 Judge Dredd Yearbook...

Heavy Metal Dredd
These one-offs start out with some obvious link to rock music (the first is Dredd as a song, the second riffs on Pinball Wizard, the third references Ozzy Ozbourne) but then that either gets forgotten altogether or just obscure enough that you might not notice.
Sparks back up in issue 2.13...

Middenface McNulty: Wan Man an' His Dug
Top Dogs in the 1991 Judge Dredd Annual had set up the direct link between Strontium Dog and Judge Dredd through the narrative tool of time travel, and in this broad comedy the same technique gets applied with McNulty involved in the paradoxical shenanigans.
Gies his lumps agin in 2001's issue 3.76...

Brit-Cit Babes
We follow the Brit-Cit Vice Squad's undercover investigation of a people-trafficking operation. It's sort of a cross between The Sweeney and Charlie's Angels. There seems to be legs for Shea, who's a judge with pyrokinetic powers, but the series came and went in a flash and ended on something of a downer.
Tis one and done.