This stage demonstrates well the importance of strong, identifiable characters to the popularity and longevity of a good story. Necropolis has the Sisters of Death, who are a bit hokey (winding Kraken up with playground taunts or giving chilling weather reports to a captive citizenry) but definitely memorable. On the other hand, Universal Solider stars ... a guy. And Chronos Carnival also has a guy (in a wheelchair), and that woman. And Dry Run has people in it. And horses. Say what you like about Armoured Gideon: you don't forget him.

Sister comic Crisis goes through some significant changes during this stage, moving into more contemporary political territory (phase IV) before eventually going monthly (phase V) and dropping its signature strip. As this happens, the House of Tharg also launches Revolver as a new adult-aimed art-house monthly (with hindsight in direct competition with Crisis).

At the tail-end of this stage we also get the launch of Judge Dredd - the Megazine in what is now known as Volume #1: a fifty-two page monthly focussed on the Dreddverse. 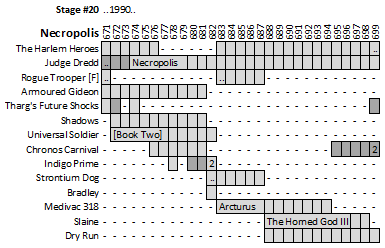 The Harlem Heroes *SOFT REBOOT*
It's Beverly Hills 90210 meets Rollerball, as a gang of easily identifiable (but attractive) misfits (leader, vixen, driver, tough & hacker) are forced into service as mercenaries by a shadowy government organization, and then betrayed. Also, they have jetpacks. Everything explodes: whether it be escaping convicts in a mole machine, or computer terminals infected with an explodey virus (because making other people's computers explode remotely is so a thing). Then there's lots of *budda budda* and posing. Nobody ever changes their clothes, so if this was presented in smell-o-vision, you wouldn't like it. All of the work-a-day henchmen that get casually offed by the "heroes" are reminiscent of Austin Powers and The Henchman's Wife.
This continues (as agents are sent to track down Fleisher and take his typewriter away, by force if necessary) into the next stage...

Judge Dredd: Necropolis
The Countdown to Necropolis continues the setup: Judge Death's psychic claws have formed a link between Deadworld and Mega-City One, which the Sisters of Death use as a bridge in order to exert control across the dimensional void. The Necropolis epic is in three acts, starting with a build-up (674-684) in which the Sisters enact their plan to release their brothers from captivity. Once the city has fallen we have a coming together of the heroes (685-692), which include Dredd and ex-Chief Judge McGruder (both visibly scarred from their respective Long Walks), young Cadet Giant and a wounded Anderson. The third act (693-699) sees the fight back against a regime where sixty million have already fallen victim to the Deadworld denizens.

The Judge Dredd Annual 1991 has Judge Dredd and Johnny Alpha (& Wulf) team up in the time-traveling shenanigans of Top Dogs.

Post-Necropolis tales occupy much of the next stage...

Rogue Trooper [Friday]: The War Machine
Hamburger Hill meets Blade Runner, as Trooper 19 (Friday) confronts his maker (Clavel) and demands an explanation for the pointless death of his comrades. Even though the build-up to this point ignored Norts and Southers, here they're visually represented as two sides in a designer war, engineered by Clavel to generate profit. Despite later retcons, the dialog here suggests that this is a clean reboot of the original Rogue Trooper, as opposed to a shared universe.
Friday returns (with a new story) in the next stage...

Armoured Gideon *NEW THRILL*
A psychic press photographer unwittingly captures images of the titular giant robot who splits his time between wiping out the demonic life of The Edge (a demon-dimension linked to Earth through plot-convenient temporary portals) and chasing down anyone who's taken his photograph. Fun things about Gideon are his emote-screen (an idea stolen from Mek-Quake), the inventive ways in which he eliminates enemies and of course his single catch-phrase ("Annihilate!"), which reminds us (latterly) of Shakara. The 1990 Sci-Fi Special has the medieval fantasy one-off Starhavon's Edge.
We next get to see Gideon in No, No, Nanette (prog 722)...

Shadows *NEW THRILL*
Ahead of its time: a cyberpunk thriller cross between Johnny Mnemonic and The Net (both from 1995), with a climactic nod towards The Matrix (1999), as Nina (an elite member of a heirarchical future society) loses her status and becomes a shadow-person.
The rather gloomy denouement left no clear path to a sequel so this is a one and done.

Universal Soldier: [Book Two]
Uhm...it's like The Magnificent Seven (minus six), but that's okay because this one guy's got a magic crystal that can turn him into Galactus. He drops that later, but gets a shag. Also, there are some men riding giant rhino-things.
Returns with The Indestructible Man, starting in prog 750...

Chronos Carnival *NEW THRILL*
Uhm...so there's this theme park inside a (big) spaceship, and sometimes dangerous triangular portals to other worlds open up inside some of the attractions, so the staff are also heavily armed (in case anything bad pops through), and adventurous. Like Scooby Doo, but with laser guns. The second adventure sees a tour around The Caverns Of Colony Five go awry as a superpowered neanderthal troll is set free.
And that's it for Chronos Carnival.

Indigo Prime
If you ever wondered what the H-E-Double-Hockey-Sticks is going on in Indigo Prime then you need to read prog 678, which has a guided tour of their facility and operatives, plus a back-cover diagram of their organizational structure. After that we get a set of adventures with paired operatives in Winwood & Cord, Downtime (680-681) and Fegredo & Brecht, How The Land Lied (which has two episodes, both in prog 682).
More from the cast of thousands in the next stage...

Strontium Dog, The Final Solution
This section starts with a catch-up episode (sensible given that it started in 1988) before getting down to business: a business so impactful that it later gets referenced by Mike in the tv show Spaced (2001), as an attempt is made to rescue everyone trapped in a hell dimension. What's depicted here as a very permanent end to a major character (they disintegrate into a pile of bones) is re-considered to have been a tale from an untrustworthy narrator by the time 2010 swings around. As retcon shenanigans go, the level of salt it engenders is wonderfully dampened by the two decade gap and consideration of the wishes of various creators.

The next Strontium Dog (singular) tale is in the 1992 Sci-Fi Special, but we don't see another series until the year 2000. On the other hand, Strontium Dogs (plural) starts up a non-Alpha sequence in prog 750, and pre-Final Solution Alpha guest stars in the Judge Dredd epic Judgement Day in 1992.

Medivac 318: Arcturus
Medivac moves into orbit around Arcturus, where anti-human riots blend with anti-psychic pogroms to make for a dangerous rescue mission. A great ensemble piece where every character has something to do.
That's all she wrote for this.

Slaine: The Horned God, Book III
Having sought the four treasures (the spear, the sword, the cauldron and ... the other one) in the first book, and found them in the second, now Slaine gets to use them. The "never trust a woman" motif of much of the author's work comes to the fore here with Cathbad entoning almost exactly that with "you can never trust a female": in this case the Earth Goddess herself. Slaine slays Slough Feg, the old horned god, to become the new one: then there's a great flood.
Slaine returns in the 1992 Yearbook, but skips the prog until 1993...

Dry Run *NEW THRILL*
Set on a post-apocalyptic earth, a group of telepathic warriors are blackmailed into carrying out a desert-set mission (a *cough* dry run) to retrieve a McGuffin. There's lots of riding around, swords flashing, flying jellyfish, giant crabs, half-buried submarines and so on: but much like Beyond Zero, it might be considered a lot of shouting about nothing.
Uno y listo.

Bix Barton: The Full English Breakfast
The 1990 Sci-Fi Special presents Marmite on toast as a possessed breakfast proves no match for a deftly handled brace of croissants, and a clear nod to camera.
More Marmite in the next Winter Special...

The Journal Of Luke Kirby: The Dark Path
The 1990 Sci-Fi Special presents a follow-up tale to Summer Magic. In standing up to some local bullies, Luke Skywalker Kirby realizes that there's a dark side path to the force his powers.
Returns in 1992...

Lost In Zero [after Beyond Zero, after Night Zero]
The 1991 Annual features a tale that's a cross between Big (1988) and Ted (2012). There's always something creepy about kids with adult minds gettin' jiggy, and that's no different here.
Returns for another series in prog 731...

Moon Runners: The Homecoming
The 1991 Annual takes us on one final trip (pretty much literally), as the psychic navigator drops a bad tab.
And that's it for Moon Runners.