The much-maligned Stallone-starring Judge Dredd movie of 1995 was obviously something 2000 AD wouldn't want to ignore (except, perhaps, in hindsight), and so Tharg went all out in celebration and rebranded all the titles with similar banner logos (and renumbered everything but the prog as relaunch issue ones):

Stallone grunted his way onto the cover of prog 950, but inside Dredd remained with the original design, and the movie-version was instead launched into spin-off comic Judge Dredd: Lawman of the Future, along with the transforming lawmaster (with new, improved hover mode) and an enormous silver codpiece strapped onto the uniform.

While Satan landed in the Megazine to bother Mega-City One, the prog became engorged on movie hype and grew to forty-four pages, with the extra room given over to a second Judge Dredd slot. Double-barreled Dredd must have seemed like a great idea, riding high on the back of a Hollywood blockbuster. 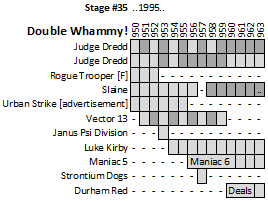 Judge Dredd
The Pat Mills scripted Flashback 2099: The Return Of Rico is a stylish, full colour, eighteen-page remake of the six-page original from prog 30, with the same incongruous ending riffing on The Hollies' "He Ain't Heavy He's My Brother" lyric. There may have been an assumption that the Titan penal colony was only for Judges, but this story has it that merely a portion of the inmates are Judges, and that they get treated particularly poorly. The body horror involved in operating on the prisoners to acclimatize them to working in a vacuum is here brought back to the originally hideous version, rather than the dialed down (but simpler to draw) "metal nose" that was used during the Purgatory / Inferno debacle.

In a sequence of one-offs from John Wagner, there's a sense that Dredd is being reintroduced for anyone who might be swinging into the comic on the Hollywood vine. In a bizarre demonstration of unwarranted machismo, Chief Judge Hadrian Volt challenges Dredd to a bout of no-holds barred day-stickery in order to negotiate a piece of departmental policy (in The Decision). The retconned Awakening of Angels is thrown out to resurrect Pa and Junior Angel so they can be used in the Megazine's The Three Amigos.

I'm fairly sure that Bad Frendz introduces the criminal organization of the Frendz, and has Vitus Dance use weird scorpion magic to assassinate otherwise untouchable witnesses. This is not the last we'll hear of the Frendz, or crime lord Nero Narcos. Alongside this introduction we also get The Cal Files, where Judge Jura Edgar (head of PSU) manipulates Dredd into uncovering what seem to be shocking revelations from the past. This story also serves to introduce an upcoming epic by having Dredd appointed as Chief of Sector 301: The Pit.

It's off to the Northwest Hab Zone in the next stage...

Rogue Trooper [Fr1day]: Angels
Following the new rule that you're not allowed to do a Rogue story unless you reboot or retcon part of it, now Nu Earth has no poisonous chem clouds - or, wait - which Nu Earth is this, anyway? Maybe this is the one without chem. But it does have Norts. Oh dear Grud...

Anyway - Fr1day makes friends with a jet pilot and they both squeeze into the same seat, but then crash-land in the desert, which involves one of the wings being ripped of the jet. A man in a jeep rescues them and they go and fetch a bunch of fuel and a handyman, with which they refuel the jet and glue back on its wing (true!) before taking out a Nort bogie.

Slaine
Season two of Quantum Salmon Leap starts with The Name Of The Sword, which posits the idea that women from different moments in time are just a sort of shell into which a Niamh-like spirit is poured, and that Slaine's some kind of eternity-surfing rolling stone.

Slaine (with Ukko in tow) plays the part of Robin Goodfellow in the Norman era, where dark-god worshipping landowners have made the earth goddess ill. He chats up Maid Marion (a nunnified pseudo-Niamh) and takes a few Norman heads with Brain Biter, not thinking it too many.

The sequence continues directly in Lord of Misrule, where Slaine transmogrifies into a flying beastie to go hunting for Niamh/Marion. The moral of the story is that if you agree to get nekkid and jiggy with Slaine then you're a free woman, but if you don't then you're the slave of a dark god that's trying to enslave humanity. Whilst it's clear that this in an argument against Christianity (Jesus shows up as one form of the dark god just in case anyone's confused) but pro-paganism, it's not a feminist statement as Niamh/Marion is equally bound whichever way she turns.

We have to wait 31 weeks for the final four episodes in the next stage...

Urban Strike [advertisement]
With tongue planted firmly in cheek, this was partly a joke, and partly a cynical marketing ploy for a classic helicopter gunship game (sequel). Whacking "TM" next to the title was either subversive or a legal requirement: it's not clear which. The heavily-armed "Mystery Machine" is crewed by a bunch of action movie stereotypes who use polite metaphors in place of swearing, whilst also providing the birthplace of the expletive portmanteau beloved of Sinister Dexter: funt. They take gung-ho to new heights (or depths) in their mission to ... blow stuff up - usually innocent bystanders (like in Team America). The joke has been told by the first episode, but this spins out of control for another five.
It's over and done with after one series. We can rest easy that at least you'd never catch Rebellion doing anything like this - I mean before you knew it, all the stories could be replaced by some kind of zombie army of mindless game tie-ins...

Vector 13: [Caseload #1] *NEW THRILL*
Clearly inspired by The X-Files, each of these standalone terror tales cases is introduced by the inhuman-seeming Men In Black, who act as a narrative cipher. This manages to drop the most effective thing about The X-Files, which was that Mulder & Scully tied the series together and made it more than just a sequence of Twilight Zone episodes. On an editorial level, there's a definite angle here: rather than serving as a new anthology alongside the existing Future Shocks, this series sets itself up as a replacement.
Lights up! Another caseload drops onto Tharg's desk next stage...

Janus Psi Division: House Of Sighs *SPIN-OFF*
An intriguing one-off in which Janus (the psi from Inferno) is invited to a secret inner circle of Psis.
She's back next stage in a longer tale...

The Journal of Luke Kirby: The Old Straight Track
A leyline-based mystical road trip in which Luke and his uncle Zeke visit various friendly green and pleasant hermit-wizards on their way to an important moot. They are stalked along the way by one of those evil 80s villains who watches the heroes' progress through a crystal ball and sends agents out to stop them (like in Krull or Hawk the Slayer). The villain calls himself Nathair Nathrach, which as far as I can divine means "Serpenty Serpent", although Zeke calls him the "Winged Serpent". The "ha ha - just kidding" ending marks this as the weakest of the Kirby adventures, so it's perhaps not surprising that this tails off.
We get a finale next stage...


For me, the Old Straight Track was the second best of the Kirby adventures - I really liked it; not much of a plot but a lovely, folksy pagan atmosphere, and I actually learned a bit about cairns (I've come across a few of them on hiking trips).

Maniac 5: Maniac 6
In an unlikely cross between The Fugitive and Robocop, the one-armed Maniac 5 (a man's mind trapped inside a cyborg) is on the run from the forces of President ... Hilary Clinton (and a maniacal Ross Perot). As Frank (Maniac 5) is mostly invincible and tearing through regular troops like a hot knife through butter, and knows the sewer system really well, the only thing that they can use to hunt him down is the deranged and murderous Maniac 6. Cue nonsensical carnage!
Franks swims off into the sunset here, never to be heard of again.

Strontium Dogs: The Mutant Sleeps Tonight
Feral has transmuted into a weird, non-verbal cross between a butterfly, a bat and a rodeo donkey. The blind lady is looking after him (by socializing him) and then he then goes into a chrysalis.
The story says it continues in Durham Red's Deals (below), but it really doesn't. Instead, there's a new series of this in the next stage...

Durham Red: Deals
When Durham offed the a Gothlord in Island of the Damned (see stage #20), she made an enemy of the Goth King, and here she sets up a contest to win his amnesty.
The stage is set for the Night of the Hunters, starting in prog 1000...